BY SPARSHA MURALIDHARA AND SOUMYA KONA

Living off the Land: What it’s like to be an Honors Gator without a meal plan

This fall, Honors students were faced with one of the biggest problems they likely have ever encountered: what to eat? Many incoming freshmen entering the Honors program concluded the best choice for them this school year would be to get in touch with their domestic side. Students in Hume had a range of reasons for turning down the university’s selection of meal plans and opting instead to fend for themselves in the Hume kitchens. “The meal plan is expensive, and there are only two locations for the open access,” said Hume resident and first-year Biology and Spanish major Christina Florendo. “They’re also not really that close to Hume.” It was for these reasons that Florendo, and many other Hume residents, often found themselves in the kitchens. Although the idea of cooking for oneself may appear intimidating, lack of knowledge in the culinary arts didn’t prove to be a deterrent for students. “After living for about a month on frozen dinners and eating out I started to spend a lot of money and didn’t feel good often, so I started cooking for myself,” said Kaitlyn Palm, a first-year Criminology major. “It’s a sense of accomplishment that I can cook for myself and it turns out really good actually.”

Another hurdle for incoming college students is their preconceived idea of what dorm life will be like, and for those students also needing to prepare meals in the Hume kitchens, expectations were often very different from the reality. “I expected to be cooking more, but I haven’t been cooking that much,” said first-year International Studies major, Vikasni Mohan. “It’s a good balance of cooking and going out to eat with my friends.” Mohan in particular turned down the meal plan because she predicted she would be more likely to go off-campus for food than to visit a dining hall. “I didn’t really want my options limited, when I could be buying food from somewhere else anyway,” she said.

The students of Hume who decided to take the harder path of dorm cooking may have the additional stress of worrying about what to make for their next meal, but they stay positive about the circumstances. “Everything works well, and there’s lots of counter space,” said Palm. “You never realize how much space you need until you have to share with two other people and have a lot of stuff to cook.” As Palm mentioned, the culinary adventure is shared by many Hume students without meal plans, offering a bonding experience that has helped to make a huge building seem smaller. “Everyone is going through the same thing,” said Mohan. “You’ll learn to cook and you’re absolutely not alone.”

Like any endeavor, putting together meals in a dorm also has its struggles and cooking is not as easy as it seems, which these students can certainly vouch for. “I’m worried about salmonella or diseases from raw chicken and meats so I have to make sure I’m super careful when cooking and washing everything,” said Palm. Being true Honors students however, residents are always searching for ways to improve themselves in the kitchen. “So far I’ve mainly been using the microwave for my food,” said Florendo. “But I really want to learn how to cook a more diverse range of foods.” Everything taken into account, the Honors community would like to offer some supportive advice to any potential gators from their own experience living without the meal plan: “Try cooking the summer before and go grocery shopping,” said Mohan. “And don’t burn down the kitchen.” 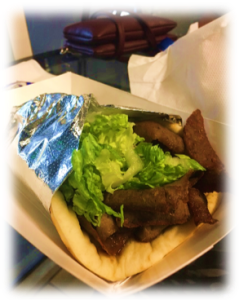 This week’s food review takes us to The Spot, a neat little restaurant tucked away on the corner of NW 18th Street. A longtime favorite of many veteran gators, The Spot is definitely on our recommendation list for freshmen still trying to find good eats that don’t break the bank. I ordered “The Gyro”, pictured above. Savory slices of gyro meat were complemented by crisp lettuce, onions, and cucumber, neatly folded into warm pita bread and topped with some of the best tzatziki sauce I’ve had in quite a while. The entire dish was incredibly refreshing, and for $6.25 a plate, definitely a steal. Other dishes seemed equally as inviting, including their varieties of salads and burgers. The restaurant itself is neatly kept, but a little on the small side—try to avoid coming in at peak rush hours if you want to find a seat. Nevertheless, The Spot has its crowd for good reason–you’ll find yourself a regular in no time at all.

When even Taco Bell is over budget, these beans are a cheap way to add protein and fiber to your diet without sacrificing flavor.

Every student cook should have a good arsenal of spices at their disposal—just be careful not to get too excited.