Hume is considered one of the nicest dorms on campus: suite style rooms and a semi-private bathroom, a prime location with two accessible parking lots, and a convenient five-minute walk to Frat Row for game days. But after the night of September 26th, many Hume residents thought that maybe communal bathrooms wouldn’t have been so bad after all.

Despite a midnight fire drill being extremely unlikely, many students didn’t suspect anything was wrong. “I didn’t really realize it wasn’t a drill until fire trucks started pulling up,” Ted Panos revealed. Even then, Ted went on to explain, he didn’t realize the seriousness of the situation until he saw the firefighters moving with haste, going in and out of the building and unloading equipment off the trucks. A pipe had burst on the second floor,

It wasn’t until nearly 1 am when the Hume East residents were told it was going to be another 2-4 hours before they would be let back in. Most students were unprepared, forgetting their shoes, phone, keys, or even in some cases, their pants. Olivia Stein recalls her forgetfulness, “Someone gave me a blanket because they felt bad I didn’t have any pants on.”

Instead of sitting around outside in the middle of the night, students chose to go to the study rooms, to Graham, or to Hume West. Olivia Trumble recounts how she and 10 others crammed into one dorm room in Hume West, dragging in furniture from the common area. “People were sleeping under the beds or in the closet”, she described. They talked, attempted to study, and even had mini dance parties. Once the third floor residents were allowed back into their rooms, Olivia hosted two “refugees” from the second floor, which was still evacuated.

Throughout the eventful night, students were posting on the Facebook group, writing jokes, making memes, and even taking polls: “Which Hume Disaster are you? Flood or water shortage?”. Some made propositions about building an ark, while other Honors students not living in Hume joked about renting out their room for $100 a night. All joking aside, the Honors students really did come together and help one another, whether it be by sharing their room, offering a blanket, or helping set up dehumidifiers the next day.

Despite the loss of sleep, moldy carpets, and soggy CHM2045 notes, the Hume residents managed to keep a good attitude and, more importantly, their sense of humor; Dr. Melissa Johnson, an Honors advisor, lightened things up by posting on Facebook “Best Hume water outage meme wins a prize” (the best memes ar e included). Hume-rs aren’t going let a little water ruin their spirits.After all, Hume is only “home” with “u” inside 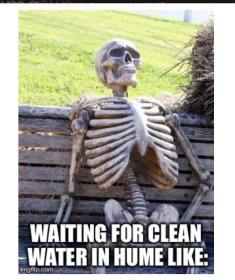 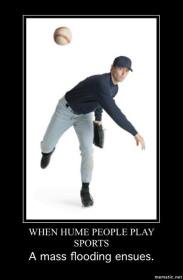