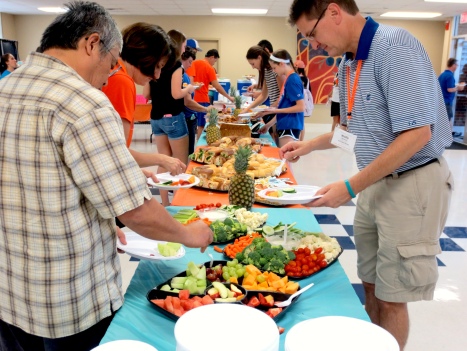 In college, it can sometimes seem like there’s nothing outside the edges of campus. After cramming for tests and devouring meal after meal in the dining halls, it feels like family, friends and real meals don’t even exist anymore.

Enter family weekend. This October, the Student Honors Organization hosted an Honors Family Weekend for all of the moms, dads and siblings of the UF honors students. Not only did it give families a chance to get a glimpse of life as an honors student, but it also brought in a slew of  fresh faces, reminding honors students that, yes, there is sentient life beyond the margins of UF campus.

On the first day of the Family Weekend, Mark Law, the head of the Honors Program, put on a mock (un)common reads for honors parents and students. In the bright afternoon quiet of Graham Gallery, Law described the purpose of the (un)common reads courses, saying that these classes were intentionally created to be small, comfortable and casual… much like this ad-hoc class.

After his brief introduction, Law led the group in a discussion of The Martian, prompting them to explore themes such as isolation, moral obligation and the hierarchy of authority. Both parents and students were quiet at first,  the former perhaps unused to raising hands and being called on, the latter perhaps uncomfortable with sitting next to their parents during a “college class.” But everyone soon chimed in, parent and student alike.

As the discussion peaked, some people started talking over each other, addressing not only Law’s questions, but points made by others in the class. Though this was one of the first events of the weekend, the Gator Community was already strong.

Parents were not only able to experience the academic side of UF, but also the social side. On Saturday, October 1st, droves of students and their families flooded the North Lawn near the football stadium for the UF-Vanderbilt football game. Moms, dads, siblings and students all gathered around TVs and tables to participate in one of UF’s most famed traditions: tailgating.

Sunny, bug-less and vaguely breezy, the weather on the North Lawn was perfect for game-watching. Aside from the game and the grub, UF’s Campus Diplomats also provided a photo booth, several bounce houses, and a caricature-drawing station. Families gathered to take pictures with their students, and young children raced over the lawn, cycling through the bounce houses dozens of times.

One need not be watching the game to know whether the Gators were winning; raucous cheers and applause erupted whenever the team scored. And like a domino effect, families across the lawn started cheering once they heard the news. Individuals from all over the country — whether they were gators through family or through transcript — sat in folding chairs, all facing the television in honor of Gator Football.

After the game, UF Honors students and parents were invited to an Honors Family Luau in the Graham Gallery. Families entered the Gallery holding plates loaded with food from an expansive buffet, leis draped over their necks by Honors volunteers. Brightly colored tables were scattered throughout the room, sprinkled with tropical flowers and gaudy confetti. Families sat two to a table, mingling with strangers and becoming friends. Entertainment for the evening was provided by Taylor North, a guitarist reminiscent of Ed Sheeran, and “No Southern Accent,”a campus acapella group with tight harmonies and a big sound.

Between performances, families ate and laughed, a thrumming soundtrack keeping up the energy. The night was topped off by an “honors dad’s limbo contest,” wherein the dads competed for an “Honors Dad” t-shirt. Families and staff left the Gallery laughing and joking, twirling their leis and thanking their lucky stars that their students attended a college that wasn’t too uppity to play limbo once in a while.

One of the last events of the weekend was the Legacy Pinning Ceremony, an event reserved for Gator alumni and their children currently enrolled as Gators. An exquisite breakfast buffet was provided, as well as name cards and programs, making the mood distinctly more formal than that of other events put on by the Family Weekend.

But once the Dean of Students, Jen Day-Shaw, stood up to speak, the aura relaxed; Day-Shaw, in her down-to-earth southern accent, welcomed the Gator Alumni from all over the country, and gave a nod to the Gators taking classes at UF for the first time. She drew attention to the fact that alumni graduated from a myriad of colleges, with a wide diversity of degrees. And she acknowledged that in the years since these alumni graduated, UF has increased in competitiveness by leaps and bounds. So while credit must be given to the alumni for continuing the Gator legacy, credit must also be given to current students who made it through the rigorous acceptance process.

Day-Shaw then invited all the families onstage to receive Gator Legacy pins,tiny gold pins in a square box. Parents teared up as they pinned the golden emblem onto their children, thinking about their time as Gators, and about how quickly that time has passed. Students tried to laugh away tears as they affixed the pins to their parents, thinking about how hard their parents worked to help them achieve their goal of attending college at UF. Tears, hugs and smiles abounded as the ceremony finished, a perfect ending to the Family Weekend.

So even though bringing your parents to campus seem cheesy, embarrassing or weird at first, it’s actually a beautiful opportunity to share your journey with them, whether it mirrors theirs or not. And it’s always a good reminder that college is not necessarily the be-all, end-all. We will graduate and probably become parents just like them someday, raising our own kids and visiting them on our own parents weekend.  In the meantime, let’s remember to call, text and appreciate our parents… because whether they attended UF or not, they have done so much to help perpetuate the Gator Legacy.