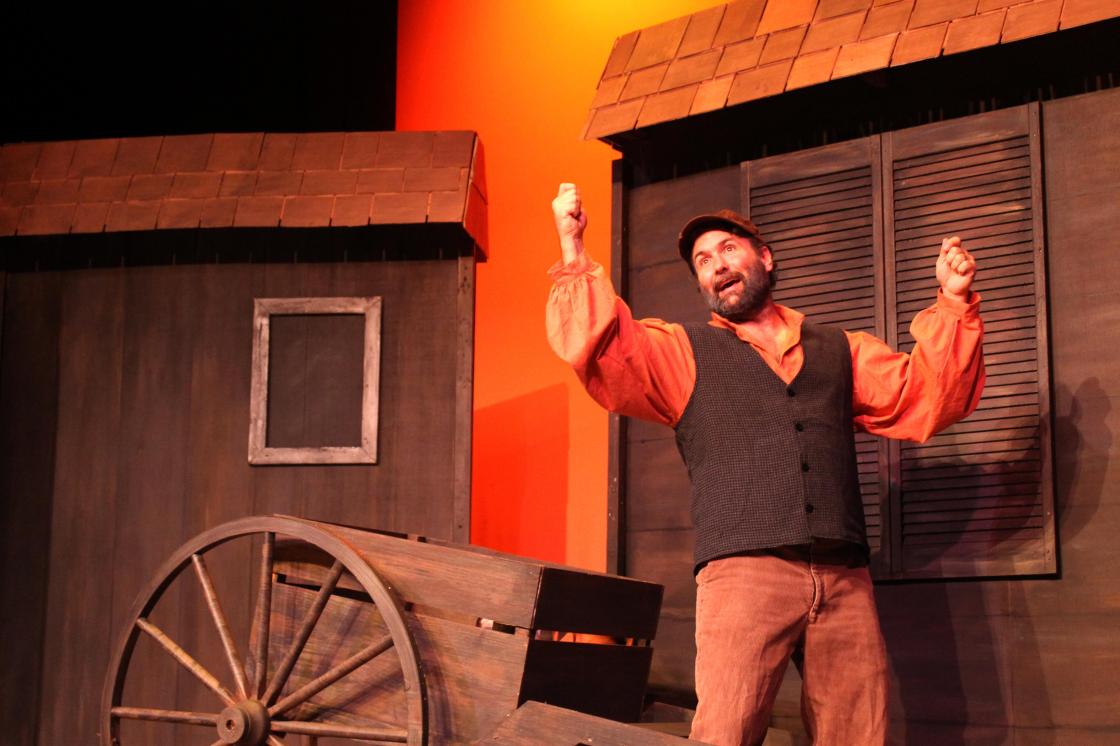 Review: Fiddler on the Roof

One of the most popular musicals ever created, Fiddler on the Roof is a well loved classic of community theatre. Its most recent production at Gainesville Community Playhouse captivates the audience while reminding us why this musical is relevant in our college town.

Fiddler on the Roof is the story of Tevya, a Jewish patriarch in early 20th century Russia, as he tries to do the best that he can for his family. However, the currents of love and new ideals flout his attempts to maintain tradition, and meanwhile, his three free-willed daughters make their own way without him.

Dan Christophy is a wonderful performer and the star of the show, playing Tevya. His acting chops are unmatched onstage; he succeeds admirably in evoking interest, laughter, or any other emotion necessary in the audience. However, Christophy has yet to learn how to project his voice, and is often quieter than those members of the cast who lack a microphone. He also struggles with a very limited range, causing many harmonies to fall short from reaching their full potential.

Kate Vellis plays Golde, Tevya’s wife, and has quite the opposite problem. Her beautiful voice carries through in every song she is in, but she does not give the force, nor maternal presence her role requires. Her acting is bland, soft, and inappropriate for her role.

The three older daughters of Tevye are portrayed by Tova Blasberg as Tzeitel, Brittney Kelley as Hodel, and Cameron Varvel as Chava. All three have beautiful voices and act at an appropriate level for their respective ages. Varvel repeatedly impresses with her graceful dancing, especially when seen alongside the often stumbling Kelley. Some credit must go to her nonetheless, as her emotional voice summons tears in “Far From the Home I Love”.

The large ensemble often filled the stage to the point of near overflow, which quickly became overwhelming and confusing. While the choreography and harmonising was spectacular, there was little in the way of well executed, uniform movements. A special mention must go to the band of Russians, led by Alex Christophy, who had the distinction of best dance features, and to Rick Bishop as Laser Wolfe, for his emotional energy and impeccable vocal range.

From the moment you walk into the theatre, you know the technical side of this play will be unusually attractive. Helmed by Susan Christophy, who is director, choreographer, costumer, and scenic designer all in one, a very intimate production has been created which is appropriate for the heavily religious material. Christophy shows an affinity for stage pictures, which are made all the more remarkable with the lighting design by Dan Christophy and Jacob Goldberg. The director has gone out of her way to maintain authenticity to the Jewish community of the era, and while the execution of many common superstitions seems forced and unusual, the attempt is appreciated.

Fiddler on the Roof is a classic musical, yet this production has great value in our college city. It teaches the importance of acceptance, in others and in new ideas. It also philosophises about the importance of traditions, which can be found in abundance here at UF.

Fiddler on the Roof will be playing until October 16th.

Find times and tickets at ttp://www.gcplayhouse.org/