My name is Gloria Li, and I’m a sophomore at the University of Florida studying environmental science and philosophy. Growing up on the coast of Florida, I saw how issues like marine pollution and seafood regulations impacted my own community. When I was young, the ocean was my artistic muse; it would inspire my paintings, poetry, music. Now, it is my professional muse; it has inspired me towards the pre-law track because I want to work in marine policy and science-based management solutions.

When I was notified last year that I had been selected for a position on EarthEcho International’s inaugural Youth Leadership Council, I didn’t fully appreciate how it was going to launch me into the world of ocean conservation. That picture above represents 13 out of 15 of the youth council members, united in person for the first time from all around the country, at the recent Our Ocean conference hosted by Secretary of State John Kerry in Washington, DC. Alongside the “adult” conference, we attended the student version— the Our Ocean, One Future leadership summit hosted at Georgetown University.

Philippe Cousteau, who comes from a legendary family of ocean explorers and conservationists starting with his grandfather Jacques Cousteau, founded EarthEcho to inspire young people worldwide to act now for a sustainable future. At the conference, I was able to meet Philippe and his fabulous wife Ashlan and directly discuss with them ideas to make an impact on larger marine issues (after we ate at his favorite Lebanese restaurant in DC, of course). We went through communication training with his own PR agents, who have consulted for companies such as Discovery and National Geographic. During the training, we were taped doing an impromptu interview, drafted outlines of our project ideas, and gave the council and its directors elevator pitches at the end. Personally, between working in activism and being on the UF Debate Team, I have come to really appreciate the nuances of communication. I will never turn down an interesting discussion, especially if it is about the environment— so the training was not only beneficial to me, but fun as well.  Being exposed to the “celebrity” side of things really influenced the way I thought about activism and what it meant to be an effective advocate. 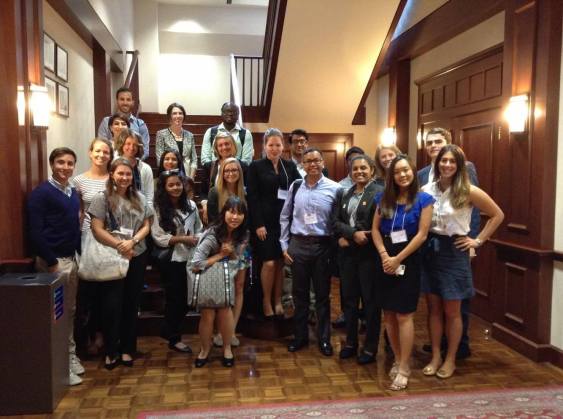 Philippe and Ashlan did give a talk to the student conference about how they travelled the world and participated in media series like Shark Week on Discovery Channel, but of course, the two-day conference wasn’t all about EarthEcho. The picture above is an example of one of our normal breakout sessions; this one was led by Anne Merwin, the Director of Ocean Planning at the Ocean Conservancy. My group was mainly composed of international students who were representing their countries such as Bahrain, Costa Rica, or Japan, or who were here studying in American universities under Fulbright scholarships. Merwin’s incisive intelligence when it came to ocean policy, mixed with the experiences and insight from around the table, ignited a truly interesting conversation that I hadn’t witnessed before at the various environmental conferences I’ve attended. For example, one student would bring up an illegal fishing practice they dealt with in coastal Africa, and another student from Peru would pipe up about ways to remedy that practice using methods they had seen or even personally enforced in their own cities.

We also got to mingle with the adult sessions occasionally, and one of these instances was when we attended the panels with such figures as (second from the left) Segolene Royal, the President of the COP21 and Minister of Environmental Affairs in France. Another discussion, conducted in the same chairs, was held between John Kerry himself and celebrity Adrian Grenier, who I had coincidentally seen at an earlier environmental conference over the summer, the One Young World summit in Arizona. High level foreign dignitaries, if not on the stage, were scattered throughout the audience, absorbing the conversation. It was exciting for me to see worldwide interest in protecting the marine resources that ultimately sustain us all, and to hear that people like President Obama were finally taking tangible strides towards realizing this interest through the establishment of marine protected areas (at the conference, he announced the establishment of the first MPA in the Atlantic Ocean.)

And of course an environmental conference would not be complete without inviting the scientists, engineers, filmmakers and entrepreneurs who were pioneering some of the newest and most innovative technologies in the field. The Our Ocean organizers transformed the outdoor garden area in the State Department building into a lavishly carpeted, blue-walled underwater gallery complete with statue-filled fountain, drink bars, and various exhibits, such as this one on virtual reality featuring conservation films. Other exhibits included a NASA screen projection for mapping technologies and the Safe Ocean Network, a new U.S. initiative to track and mitigate illegal fishing vessels. As I was waiting in line to get into this magical hall, I was actually tapped to give an unexpected impromptu interview on live Facebook, which was both exciting and scary. You can see that interview here: https://www.facebook.com/usdos/videos/10153860702606074/?pnref=story 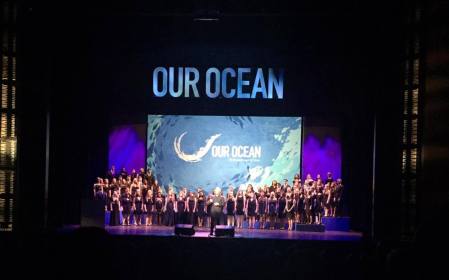 Near the end of the conference, John Kerry hosted a concert at the beautiful Kennedy Center for the attendees, and it was a great way to take a break from the serious brainstorming while at the same time evolving in our empathy with the greater issues at hand. The composer Eric Whitacre performed with the Georgetown choir his piece “Water Nights,” which reverberated through the performance hall in the most beautiful manner. Norm Lewis, the first African-American Phantom in the Broadway musical “Phantom of the Opera,” explained how the song “Music of the Night” reminded him of the ocean and he sang us a rendition that brought tears to my eyes. Grace Potter performed her first big hit, which was incidentally about going down “to the water” to cleanse oneself of one’s wrongdoings.

Sitting there in the concert hall, I was once again reminded of why I wanted to commit my life to preserving the environment, and through that, humanity. “Save the planet” is a popular (and trite) phrase in the environmentalist lexicon, but I realized that, at least for me, a new one should be adopted: “save the people.” After all, inherent in the struggle to ensure the survival of the human race is the belief that it deserves to be here. And it might be easy to look around, see the horrors of overfishing, deforestation, plastic pollution, and say that humanity has ruined the planet. It usually takes a second look around to see the artistic and historical marvels of the world, the stunning technological achievements of the 21st century, and to conclude that humanity can redeem itself. After all, the only thing that may transcend the destructive force of human error is the ingenuity of human creation.

The following day, biking around the DC monuments at sunset, I stopped by a quote in the MLK monument that said it all for me (see above). Martin Luther King wasn’t referring to the set of issues I deal with directly, but they are not as dichotomous as they might seem. In a lot of areas of the world, the populations that are disproportionately hurt by environmental destruction and pollution‚ the populations that find themselves silenced in the legal and political systems of their countries, are the minorities. Intersectional solidarity is what we need to move forward, especially with issues that affect way more people than just beach communities and the seafood industry. Like MLK, I want to “make a career out of humanity”; I want to give the voiceless a legal voice, help corporations find an ethical backbone, and encourage sustainability as a new form of humanism.