A souvenir that was originally worth almost three million of German Marks in times when the first Bible was printed ended up magically in my hands. Well, not exactly magically. I made it myself. It surpasses all the other souvenirs I have brought home so far. I had the privilege to print a passage of the Old Testament with hand-made, cursive letters on the hard paper of one of the original printing presses.

Johannes Gutenberg invented the printed press around 1455 in Mainz, Germany, and I had the extraordinary chance in Gutenberg’s Museum to do the same job 25 people were in charge of some 500 years ago – to print a page of the Bible. Prince Philip, Duke of Edinburgh and the husband of Queen Elisabeth II, did exactly what I did in the photo above – suffice to say, I felt royal. Now, that’s what gives flavor to traveling.

For this last stop in my “Tour of German cities,” I am telling a story about the history of print, relaying the tale of the city of Mainz and describing the SWR regional media house with TV and radio station. This idea came about by a random conversation with my German friend, who is, interestingly enough, coming to our university for her Exchange program in the Fall. She told me about a cultural trip to Mainz, a small nearby city. Besides it being home to the original printing press, Mainz is an important city for all types of media. What better reason for a public relations student to go on yet another journey?

The city itself is not very big, but it’s of great historical and cultural significance for Germany. The Romans founded the city in the first century BC and used it as a military post. On our free walking tour, I learned that Mainz is one of the sunniest regions in the whole Germany. The name originates with the god of Sun, Mogon. One of the significant places we visited was “Schiller Platz” (Schiller’s square), which features a memorial honoring the great classic writer. 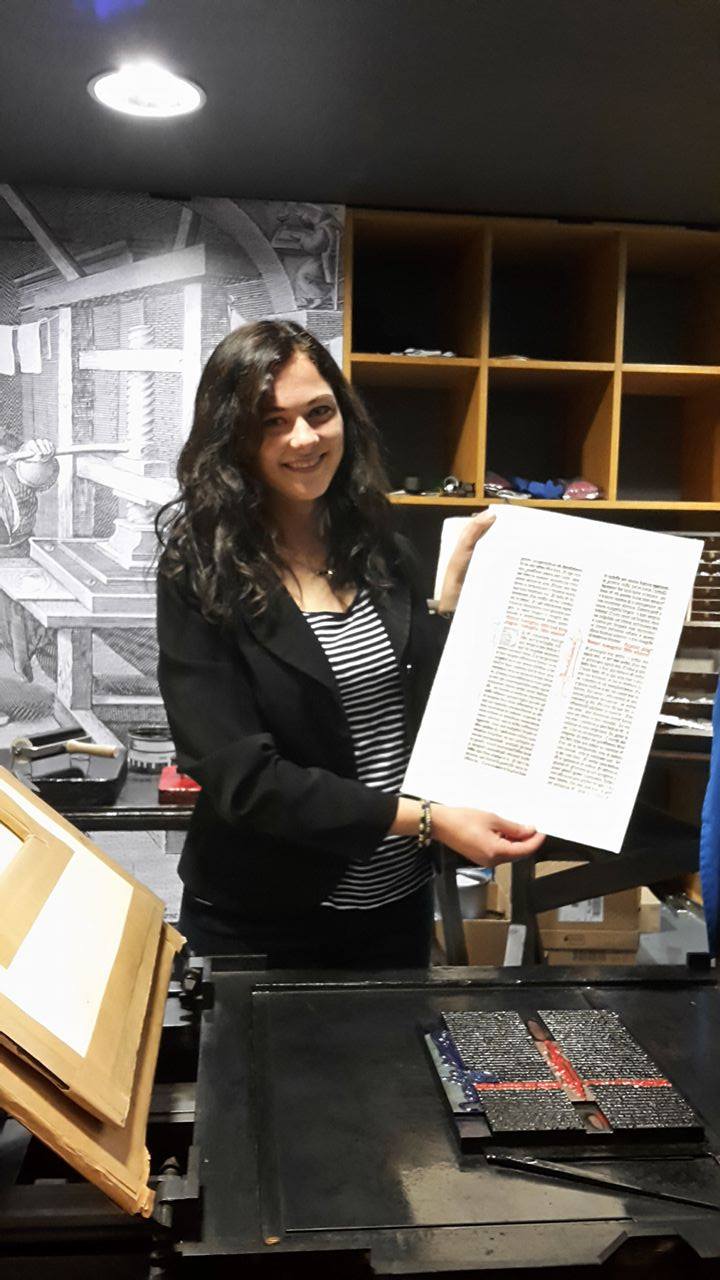 As mentioned in almost all of my blog posts, “Marktplatz” (or just “market” in English), is something easily found in every German city. Mainz is no exception. “Spargel” (asparagus) is a typical vegetable for the spring season in German cuisine and is widely sold in all markets. It can be made as the main dish or as a side. Green or white, cooked or fried – it is just a matter of taste and combination.

After a tour of the city, the Guttenberg museum became the highlight of my day. I felt as if someone had put me in a time machine and brought me all the way back to the first century before Christ. Johannes Guttenberg came from a family of skilled metal craftsmen. His first attempts to print were with single sheets of papers and small books. Some of the first books in the Middle Ages were produced by monks who used quill pens and ink. This process was extremely slow, and this inconvenience foreshadowed the time of revolution that was to come.

The first books, especially those incorporating pictures, had actually originated in Aisa, many centuries before Gutenberg’s time. Ancient Asian peoples used to engrave an entire page with two illustrations on a wood block, ink it and then print it. Such process was not suitable for printing pages with mostly text on them, which later changed with Gutenberg’s patent of printing press.

We received all this information from a documentary in the basement of the museum. It was just unbelievable that every page of the Bible was literally hand crafted, from the very letters to the finished page. A worker in the museum showed us how it was all originally made. Around 25 people labored in a small wooden workshop, first making the metal pieces of letters. Then another person had to put all the letters in the right order according to the text and overpaint them in black, blue or red. One of the stronger workers then put the combined and colored letters underneath the press.  Push and pull. In a final step, the workers carefully folded the page to dry.

Fun fact #1: Out of some 180 original printed copies of the Guttenberg Bible, 49 still exist in library, university and museum collections. Most of them are incomplete, consisting of a single volume or a few pages. A majority of 14 remains in Germany, whereas the United States has 10, three of which are owned by the Morgan Library and Museum in Manhattan.

Fun fact #2: At the last sale of a complete Gutenberg Bible in 1978, a copy went for $2.2 million. Nine years later, a sole volume was sold for $5.4 million. It has been estimated that a complete copy could cost up to $35 million at auction. 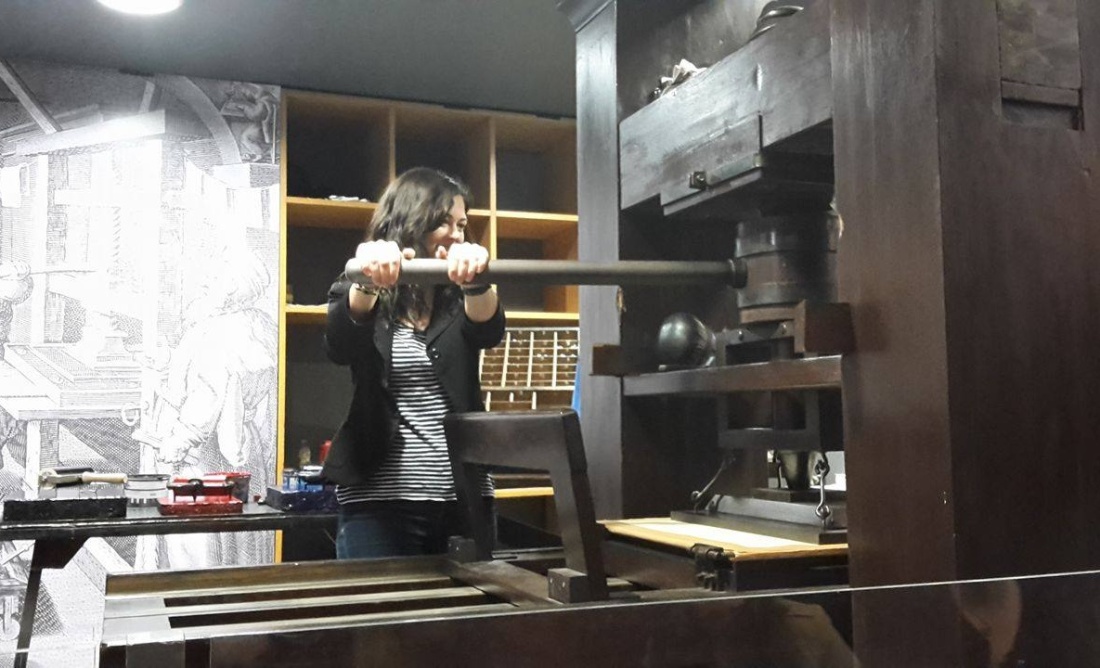 Enriched by historical and cultural stories in the museum, I happily walked out with my precious souvenir, wrapped by old paper. We were looking forward to experiencing a rather modern media story. The SWR is a regional media house, consisting of both a radio and TV station, reporting for the south-west Germany. A big grey building made of brick walls with numerous rooms inside, connected by long hallways, caught my attention effortlessly. Our lovely host and a worker in the SWR gave us a tour of both radio and TV station.

It was interesting for me to analyze how everything works in the German stations because I used to edit two radio shows in my hometown, Doboj, in Bosnia. The technology and the system I found there easily surpassed the meager resources I had back home. My heart was full to be again in a studio and see the “red light” turned on. Seeing that, I knew the moderator was on air, and we as a group could not say a word from behind. No sneezing or coughing permitted. At the risk of hyperbole, it meant almost no breathing. The moderator explained to us the process of making a radio show, with his deep, professional voice. I was surprised when he said that no particular degree, for example journalism, is required to work for the radio station. Anyone with the necessary skills can take one of the team’s positions: a moderator, editor, music editor, journalist and more.

Fun fact # 4: The moderators avoid eating chocolate before going on air because it produces inappropriate sounds at the end of the words, something like “tsa tsa,” which sounds irritating on radio. Similarly, they don’t drink any mineral water or sodas to avoid possible burping and urgent toilet needs.

Fun fact # 5: Our host revealed to us a little secret. When there are more than three songs in a row, it means that something went wrong with technology in the station –either the microphone broke, someone was late, or the news files were deleted. Putting an extra song on gives the staff some more time to quickly fix the problems and get back on air.

The tour of TV station, which was located in the same building, was no less interesting. We’ve seen two studios. They are both designed by architects and assembled manually. Most of the studios we see on TV are digital frames and backgrounds with different motifs. Manually assembled studios are extremely expensive to build and install. What first struck our eyes were the 90 cameras and tens of cables hanging from the high ceiling. As explained to us, it is crucial to have as many cameras as possible to fit the right angle and lighting. TV production is all about angles and lighting. Heights must be adjusted before recording or live streaming. The show host and the guests have to be on the approximately same level. For someone too short, the TV crew installs an extra step to stand on. For extremely tall people, there is a step lower under the floor, and the camera finds the best suitable angle.

Fun fact # 5: Not only the TV hosts, directors, sound editors and other staff members have their hands full with work, but the make-up stylists also toil. Anyone standing in front of studio camera gets a perfectly contoured and color-matched “TV face.” Even men get their make-up done. Lots of powder covers face, neck, chest and arms.

We also saw the main room behind the studio, the place where it gets hectic, busy and loud. This was the editorial room. We learned that it takes a while before the scene they’re doing live gets to the viewers at home. For the purposes of avoiding any errors that appear in the process of getting to the TVs at home, the directors’ room nowadays has an extra monitor which acts as a normal TV. It allows the staff to see what’s actually being broadcasted, and in the case of any issues, such as a frozen picture, they can fix it faster.

After the SWR tour, we went for a few more walks through the city, along the Rheine river, and got on the train back to Mannheim. I took special care of my souvenir, clutching it my hands and knowing that soon, in a brand new frame, it would join the other pictures in my room.