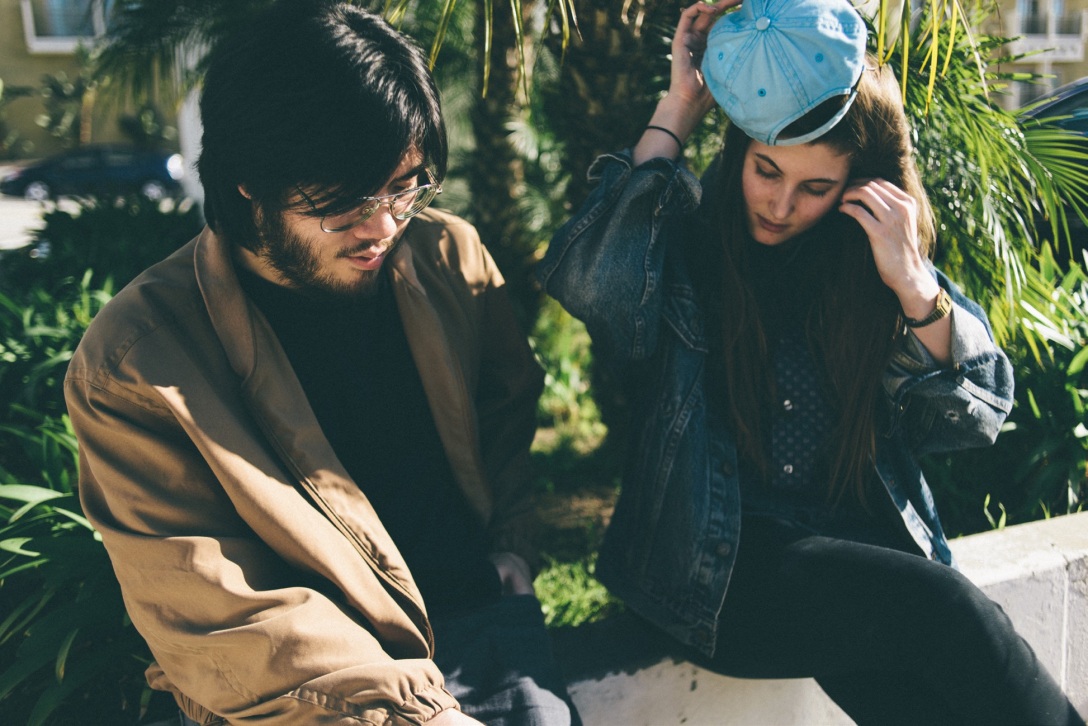 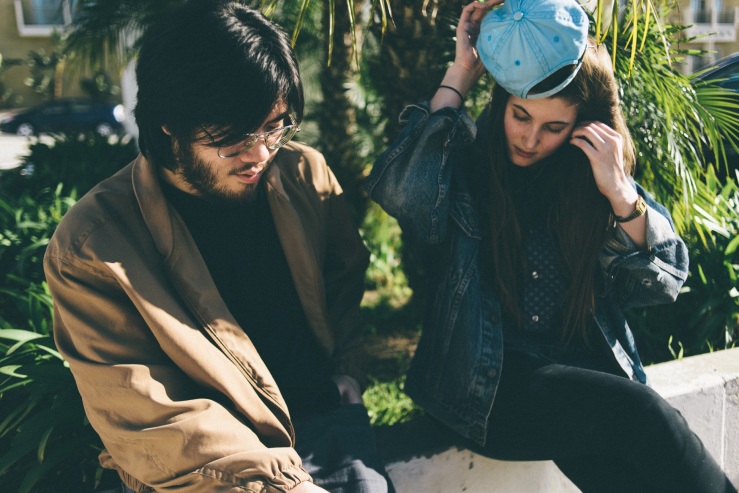 The Orlando duo Lauren Morgan and Jordan Shih, better known as SALES, stopped in Gainesville in late March along their odyssey of a spring tour across North America. They were fresh from South by Southwest and looking ahead to dates in major cities in the U.S. and Canada, and if their set was any indication they’ve got an exciting road ahead of them. The show felt intimate and spontaneous. Lauren’s vocals were the standout as the duo showcased their musical knack with warm, playful flourishes. Before the show, I sat down with Lauren and Jordan, along with the artist Alana Questell, to discuss their musical process, their history, and even Led Zeppelin. Read the interview below for a look at where they came from, what they’re up to now, and what’s in store for the future.

So you guys just got back from SXSW and you’re sort of in the midst of this spring tour. How is that going?

Jordan: It’s been great. It’s nice being on the road, especially being from Orlando. The west coast has beautiful scenery. We saw the desert, mountains, the ocean.

Lauren: Driving through California was amazing. We drove from Phoenix all the way up to Vancouver, so the change in scenery was epic.

J: And our first SXSW was a success. It’s a good central location for everybody to meet up.

L: Yeah, it was crazy and I didn’t know what to think of it. I felt like I was getting a lot of negative expectations from people, and it could have totally been that, but we were playing a bunch of shows, meeting musicians we’ve met in the past or online. Just getting to put a face to the name or reconnect with people. And there was a music expo with a ton of equipment; it’s a great place for a musician to geek out.

What are your big influences and what are you listening to right now?

J: I was listening to Krill last night, we saw them at SXSW. It’s quite different from the stuff that I would write, but they’re amazing.

L: I actually listen to a lot of radio, like radio rock and pop. I don’t know why I have such an affinity for that, like ‘80s new wave. As far as influences, to me, the most ultimate band is a band like Led Zeppelin. As far as taking ideas from them, maybe not necessarily, but just the idea of what a band is, what it can be. That’s what a band is, that’s what I should be… maybe. But I know Jordan and I come from two totally different music spectrums.

J: Yeah I’ve never really listened to much Led Zeppelin. I listen to a lot of electronic music, that was my main thing for a while. Growing up I listened to a lot of trance and drum and bass. You can’t really hear that in the stuff we do, so it’s tough to say what’s influenced the writing.

I think something that stands out for you guys is the fusion you’ve got going on with the drums and production alongside the guitar and vocals. So how does the songwriting process work for you? Where do you start?

L: It varies. It comes from a lot of improv, and finding a hook that’s worth playing over and over again and just building off of that. I write really improvisationally and I need a lot of help organizing my thoughts. Jordan and I have been working

together for six years and it took us that long to figure out how to work together and help each other. I feel like we’re just starting to figure it out so I’m excited about the next release. The learning curve is just like pssshffeww [makes a rocket motion with hands].

J: In terms the songwriting process, either Lauren or I will come to each other with a riff. Just kind of build on it, so everything is kind of built upon a hook, either an instrumental hook or a vocal hook. And then we just kind of add things on as we go, with a lot of adlibbing. The foundation of a song comes pretty quickly because of the chemistry Lauren and I have developed.

L: And sometimes the drum track is just to keep time and we just leave it. And it just kind of sticks because that’s the way it started. Then you can vary off of that.

J: Yeah, a lot of times the drums just start with a kick and a snare and then later once the song is more formed you add in some other percussive elements.

Who is Renee? Is she a real person?

L: Yeah that’s a real person. We don’t really go out much, but we were at this bar called Lil’ Indies and we met this elusive woman. There’s not a lot of seats, but I nabbed the last table and she asked if she could sit with us. And she took us for the night of our lives, just gallivanting. At that same bar though, just at that table. We have a video coming out where I tell the story actually.

J: She’s this really mysterious, outgoing woman. She would just say a lot of things, like she said she was a nutritionist at a prison as well as a stripper. You don’t really meet people like that who are really outgoing and pervasive. We were kind of blown away by her outgoing, embracing approach.

One thing that I really like is the album artwork and the continuity of it. And we’ve got the artist Alana Questell here, so can you tell me more about that collaboration? And more generally, what do you think is the importance of the visual arts in connection to music?

Alana: What happened was Lauren was putting these color blocks on Soundcloud, it was really nothing. And I convinced them to not do that, because it’s a little too simple, even for them. So the first one I did was “renee” and after that I thought to follow the same format. I’m happy with them, because they stand alone and together it’s complete. It’s important to have some visual representation that corresponds with the music or at least represents it accurately. So I tried to make something that was simple but still complete in its composite. I think that’s how their music is, for me anyway.

L: If I could include taste, have viewers taste things, I would, but you really can’t. You can see things and hear things, and they’ve showed us it’s really important to have the strong visual component to pair with your music. It’s a really cohesive, recognizable thing we’ve created: SALES.

J: It’s definitely important as far as separating yourself. A lot of people write good music, so how do you separate yourself? You need something that looks good, sounds good, tastes good, smells good. It needs to have all those qualities, and if it does people will gravitate towards it. So we’re really lucky to have Alana; we just gave her the go-ahead to create something that looks good.

A: Otherwise it would have been color blocks and then Bo Derek with corn rows.

What is your favorite SALES song or which song are you most proud of?

L: One of my most favorite SALES songs is probably one that’s unreleased. I love listening to those even though their unfinished; I’m really excited about those tracks. Thus far that’s been released, I mean “renee” is like my baby but I’m really proud of “Vow.” I think it was an excellent collaboration between the two of us. We were long-distance, sending the files back and forth, and I really had to grasp Ableton, the program we were working with. I even did my own little flourishes on that track, which was awesome and opened the door it seemed to working more collaboratively on the “computer realm.” Which I hate that place, but I’m learning to enjoy.

J: For me it’d be “Chinese new year.” It’s like the perfect pop song I would say. Just in terms of being able to complete the song later, because it sat around for a little bit unfinished. Throughout the writing process, the second part took us a while to do. Then Lauren came back and kind of killed it with the second part of the song, and then I wrote the second part of the guitar and it just resolves.

L: There was just the hook, the “see you at the movies” verse was all that existed for months. And we realized we had to do justice to this hook, we had to do something with it.

When you first started out, what was your vision for SALES?

L: I totally didn’t have a vision. I wanted to take a project seriously and I wanted to take it to the house. But I didn’t know if SALES could do that, I was really skeptical actually. In the first year, we went through a lot personally. And I wasn’t quite sure if I wanted to put all my eggs in one basket. That’s very honest.

L: We went to a panel at South By and it was “what to do if you’re a beginner band.” And Tom Windish was just like “just write good songs.” There’s a little more to it. It’s a whole package. And we’ve found it’s really important to find a few good people who believe in you. So we have a lot of support; shout-out to Joan Lee at The Agency Group, she’s our booking agent. And in every city if there’s one person who cares about you they’ll tell everyone they know about you, and maybe they have a good connection. Like a girl we stayed with in Austin who reached out to us got us a show on top of a building which was awesome.

So what can we expect to hear next from SALES?

J: Yeah, once we’re back from tour that’s all we’ll be doing is focusing on recording. We’re going to Europe in October, but we have a good four months before that to really focus on recording. So when we’re not touring we’ll be writing and recording the full-length. More catchy, heartfelt songs.