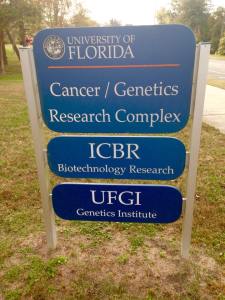 It’s cutting edge. It’s revolutionary. A century ago, it wasn’t even a word. Biotechnology.

As its name suggests, biotechnology implements technology and engineering methods to discover and manipulate biological phenomena. According to the United Nations Environment Programme’s Convention on Biological Diversity, “‘biotechnology’ means any technological application that uses biological systems, living organisms, or derivatives thereof, to make or modify.”

Now, biotechnology is a major at many universities across the world and is a rapidly expanding field. The University of Florida has been at the forefront of biotechnology research since it introduced the idea of an Interdisciplinary Center for Biotechnology Research in 1985 and officially established it in 1987. A biotechnology track is offered for undergraduates within the biology major of UF’s College of Agriculture and Life Sciences (CALS).

“I got introduced to [the field of biotechnology] in high school through a biotechnology program,” explains Elizabeth Gordon, a freshman on the biotechnology track. “The labs were really interesting and it was new science stuff I had never done before. I researched it and I decided I liked it.”

Gordon became involved in biotechnology in high school, though many students discover their interest after starting college. Herschel Johnson, Academic Adviser for CALS Biology, says he sees both types of students.

“[There is] a student that enjoys science and has a good background in science, not always wanting to do a pre-professional course,” says Johnson. “[The other type is] a student that starts off in another direction and through research, becomes interested.”

“It’s something people should get interested in if they’re into manipulation of biology to help other people,” comments freshman Carlos Victoriano, also a biotechnology student.

On campus, many biotechnology students are involved with research. Often, they start at the Center for Undergraduate Research, which helps undergraduates find research opportunities. They may research anything from genetics to the brain.

Victoriano too is interested in doing undergraduate research, though he hopes to do genetics research. This research helps to pave the way for future plans and goals. For some students, research helps them to discover that they really are more interested in another field. But for others, research confirms their interest and sets them up for a career in biotechnology. According to Johnson, most students who stay on the biotechnology track go on to graduate school, but some take other routes, including pre-professional tracks.

“I want to go to medical school and go in to pediatrics,” says Victoriano.

The biotechnology track can be considered advantageous because it provides biology students with additional preparation in genetics and chemistry. The specialization of the track is also beneficial for many students. However, students are still free to take a variety of classes and be involved in other academic pursuits. Victoriano, for example, hopes to complete a minor in leadership or history.

Even for the biotechnology students who do not choose to integrate different disciplines into their studies, biotechnology alone integrates multiple aspects of academia and provides a good deal of diversity. With a wide range of classes, research, and clubs, this track offers a wealth of opportunities while remaining on the cutting edge of science.