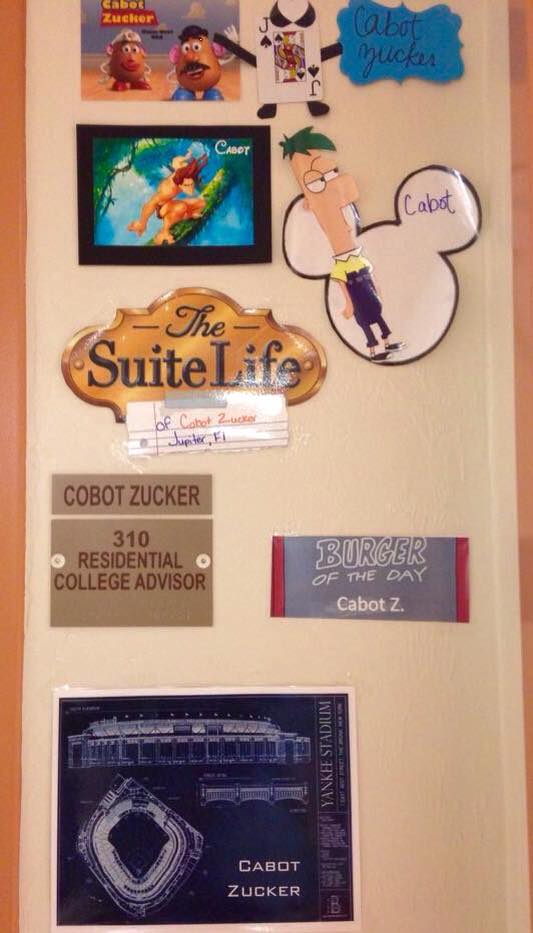 Getting a call that there was a student lying unconscious behind Hume jump started Cabot Zucker’s life as a resident assistant, or RA. “I’ll never forget that first on-call,” he says as he reminisces. Watching the student whisked away by the 911 emergency team, Cabot experienced one extreme of the wide spectrum offered by being on call.

Going on his third year, Cabot is a pro. He has spent all of his RA life at Hume. “They won’t let me leave,” he jokes. He can’t complain, however, with his single room and paid housing. “Actually, my initial motivation for becoming an RA was for a single room. It was the quickest route for a freshman to get their own room that I could think of.” The random roommate assigning gods bestowed Cabot with a gaming fanatic. Trying to sleep with machine gun sounds permeating from his roommate’s laptop doesn’t make for a relaxing night.

Once he became an RA however, Cabot realized how the RA life suits his knack for people as well as his desire to impact others. Becoming a TriP leader allowed him to see how he can influence others, and he saw being an RA offered him a different platform to continue doing so.

And he does. Freshman Avnee Mistry, one of Cabot’s residents, applied for the same position, influenced by Cabot’s remarks about the rewarding aspects of the RA life. Since he became an RA in his second year, he has had the opportunity to witness his residents grow and mature as they found their place at UF. “I still see my old residents from time to time,” Cabot says.

RAs can have a big influence on how incoming freshmen find their niche. They act as filters of UF, providing perspective and anecdotes of their personal experiences. The immensity of UF becomes less paralyzing as RAs encourage and relay their advice. “He’s told me about all he does. And he encourages me to try things to figure out my interests if I don’t know what they are yet. He’s a great listener and got me to play ultimate Frisbee with his team,” remarks Christian Dailidonis, another one of Cabot’s residents.

Many RAs want to be friends with their residents. However, ultimately, they are responsible for the well-being and safety of their residents. “There’s balance to it,” says Cabot. “Set a precedent of expectations and establish mutual respect.” Fewer problems occur that way. “Don’t be afraid to put your foot down,” he says. The RAs who complain about their residents are usually ones who only wear the friend hat.

He also cautions future RAs not to let the job consume them. Part of the job is to create programs for their own floors as well as dorm-wide programs for the residents. However, one is not just an RA. “It’s super easy,” he exclaims, “probably the easiest job on campus.” It’s a job that understands that you are a student first. “I’m here to learn,” Cabot says, and the RA life works around that. There is no need to neglect school or your other interests. As one can see, the RA lifestyle does allow you to live the best of both worlds.