That’s what immediately comes to mind when someone mentions Spain. 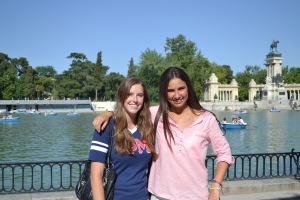 Didn’t your mom ever tell you not to stereotype people? Just kidding. But really, that’s what I would immediately think of whenever Spain was mentioned. Luckily, Facebook chat is free and my friend Jordyn spent a month there this summer and corrected my backwards notions, explaining, “I don’t think a lot of people realize how similar the Spanish people are to us. Everyday life is surprisingly similar to U.S. life except for the fact that everything is later and the food is much, much healthier with smaller portions.”

Of course, I know Spain, along with the rest of Europe, is modern and can keep up with American 21st century standards of living. But imagining the continent as it were pre-Industrial Revolution seems to be some weird default setting in my brain. My own mother even laughed at me when I mentioned this to her once. I guess I’ll blame it on the fact that I’ve never crossed the Atlantic.

Jordyn Middlebrooks, a sophomore Psychology major, is spending her second summer in the home of La Furia Roja with the Monedero family, whom she met through friends of her parents. Jordyn will spend the month of June in Spain, then 18-year-old Rocio Monedero will return to the United States with her for the month of July (and they’ve promised to visit me). Rocio is currently awaiting test scores that will decide whether or not she continues on to a university.

I found their post-secondary education system interesting. Spanish University Access Tests, commonly known as Selectividad, is Spain’s equivalent to the SAT or the ACT. However, from the breakdowns of the test that I’ve read, it sounds like taking two AP exams a day for three days straight. I’m having flashbacks to high school. No bueno.

Jordyn explained, “You pick a school based on what career you want, but if you don’t get a high enough score on the Selectividad you won’t be admitted. For example, if you want to be an engineer, you apply to an engineering school. Once you start school, you can’t really change your mind on what career path you want; it is very difficult. There are no majors or minors that I know of. You study for five years and then generally get a job. The classes are harder, and there are more exams. But if you go to a public school, it is very cheap because most of it is paid for by the government.”

I’m pretty sure Americans, who generally change their major at least once, would have a conniption if they had to choose one field of study and stick to it. It’s certainly an efficient system; however, I would hate to choose one subject at 18 years old and then regret that decision for the rest of my life just because changing majors is a pain.

Another difference Jordyn observed between the United States and España is the gap in level of awareness that Spaniards have about us compared to what the general American population knows about them. “It’s weird. Most Americans know almost nothing about their politics, their lifestyle, their economy, and government, etc. But they know a lot about ours. They know the different [political] parties and what they stand for. They know Obama’s policies. The people I’ve met admire America and are trying to make the best out of an economy that’s much worse than our own. They know American history. Things about America are on the news a lot. They also really appreciate when Americans try to become involved and accepting of their culture. It makes a big difference when an American comes and tries to learn the language and participates in things they enjoy rather than simply doing things the American way.”

1. Which system for choosing a career path is better? Does making it a challenge to switch majors put a much-needed emphasis on the importance of selecting a major and sticking to it, or hinder the ability to find out who you are as a person and what your dream job is?

2. It’s the 21st century. Social media forms a communication web connecting the globe. So, why is it that Spaniards know so much about us and we know so little about them?

Thoughts? Disputes? Am I the only one who, by default, still imagines other countries as they were 100+ years ago (again, I blame this on my lack of travel)? Tell me what you think below!

One thought on “Silly Christina, Spain is in the 21st Century, too”